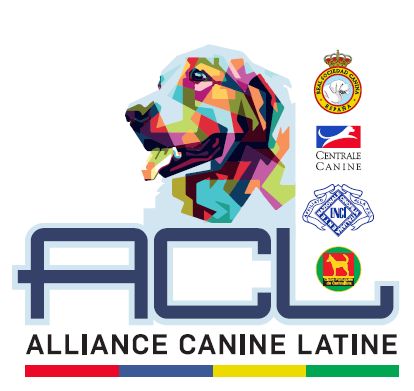 The ALLIANCE CANINE LATINE was created by the National Canine Organizations of Spain, France, Italy and Portugal to promote an agreement of mutual cooperation between these four countries to fully work together in Cynological matters of common interest in an ever challenging and changing time in our Dog World. We are convinced that such agreement will benefit in many ways all parties as well as dog lovers in our four countries.
The LATIN WINNER Event will be the official Event organized on a yearly basis by each of these countries at one of their major Shows.
In this major event several official and important Titles will be in dispute and specific Diplomas will be issued.
We invite exhibitors to participate in these challenging events and show the world the quality of their dogs as well as their talent as responsible dog breeders and exhibitors.


TITLES THAT WILL BE AWARDED IN THIS SHOW

“LATIN CHAMPION” TITLE
The “Latin Champion” title will be given to the dog that obtains three CACIBs in “Latin Winner” shows, in three different countries, by three different judges, with no time limit. This will be the only title on the pedigree of the dog.

“LATIN WINNER” TITLES
In each of the “Latin Winner” shows the following titles will be on dispute:

The diplomas could be collected during the show in the RSCE stand, previous payment of the amount established by the ACL (10 EUROS)